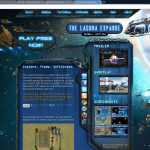 Lacuna Expanse is a fun, free MMORPG I got involved in a few months back.  It is written in Perl, which is how I came to know about it in the first place.  It uses XMLRPC, AJAX, JSON, all kinds of cool technologies, and it also exposes an open API to script against.  What’s even better is that there are already free and open source libraries and scripts to use if you want to automate things in the game.  Naturally, many if not most of them are also in Perl.  For me that is a big win.

The game is set in a space frontier, called The Lacuna Expanse.  One of my favorite aspects of the game comes through the fact that you can form and join alliances with other players.  It makes the game a lot more fun.  Alliances not only offer protection against attacks on your space territories, they offer camaraderie and help as well– help that’s welcome, because it’s not completely easy to understand the game at first.  There’s a nice tutorial for newcomers, but it doesn’t cover the most awesome aspects of the game, such as things like glyph buildings and ring-of-fire systems.  A tightly-knit alliance is what it takes to make those things come to life for you.  Then you can start setting goals, building awesome things, leveling up, and even helping others.

Personally I opted to ally with the UNSC, one of many alliances in the game.  The members of the UNSC are truly awesome and helped me get started.  These players are genuinely great people.  If you ever play, you’ll want to ally with them too.  In return for their generosity I enthusiastically donated several technical things to the team, such as a dedicated server from which to run game scripts (for those who have/want them), personal SFTP file storage, a website and blog, hosted email, and email forwarders in addition to support for those who need assistance getting set up with Perl or server access.  I think of it as one of the ways I can give back to Perl and to these nice people who so readily help out with the game.

At some point I’d also like to give back in the form of helping with the actual source code of the game, which is open and can be found on github.

You’re invited to come play with us!  Hope to see you on the Lacuna Expanse.  When you stop by, ask for Jabba the Hutt 😉